This post is part of the Secret Messages Project.  Every day for thirty days, I’ll leave my words in places where they might be found — or might never be found at all.  I hope you’ll join me.

A few weeks ago, a wrote an almost-poem about manholes.

I kid you not.

I found a particularly beautiful one while walking the dog one morning — its indentations and engravings all full of rainwater glinting with light — and I stopped right in the middle of the road and took photo after photo of it with my iPhone until a car almost ran me down.

After that, I began to see the magic of manholes everywhere:

And I never intended to show anybody the little ode I wrote to them, because — really — how many people do you know who’d want to read a gushy string of words about sanitary sewer entrances?

But last week, while walking across a field one morning, I stumbled straight over one, ringed in a perfect halo of dry leaves.

Yes — a manhole right in the middle of a wide grassy field, and I walked right over it.

I took it as a sign, went home straightaway, scribbled down an abridged version of my little ode, and I then rolled it up, tucked it in a small cylindrical box and drove back to the field.

I left the almost-poem right in the middle of the manhole cover:

And call me crazy, but I thought I’d share the original, uncut version with you today:

I cannot stop thinking
about manholes.

I mean, after all,
they’re little
human-shaped
doors,

(Surely you can feel
the mystery in that).

There is one
in the farthest part
of my yard,
hugging the fenceline.
It’s choked in ivy
and spray-painted green,
a skin of camouflage,
gravel, leaves,
all meant to hide it from view.
If I press my ear to it,
I can hear the
rush of water–
a river that flashes
beneath my feet
in the dark.

And I am no fool–
(or maybe I am)
I know we’re only talking
about manholes,
about entrances to sewers,
made so that a man
in an orange vest,
probably too tired and overworked
to think much of mystery
might clang down the ladder
in heavy boots
and fix what is wrong,
so that the water
might run clear
from my faucet,
as I expect it to. 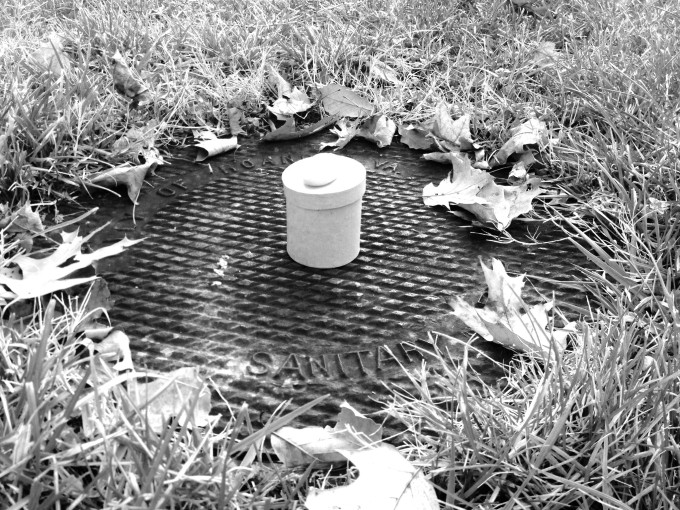