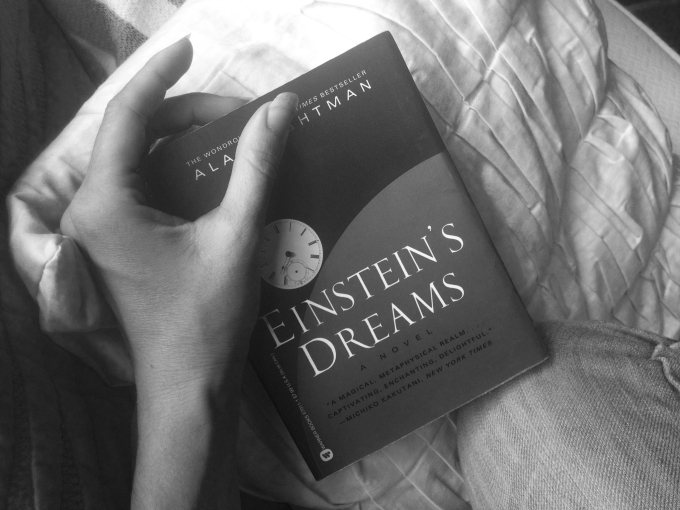 I’m one of those people who’s drawn to tiny, elegantly crafted things:

A certain kind of present that comes in a box small enough to fit in your palm.

In a perfect world, I’d probably end up in a rowhouse in Georgetown.  I’d populate the narrow rooms with an edited collection of books and breezy white linen, spindly-legged rattan chairs and those miniature orchids that grow in pots the size of pencil cups.  There’d be a walled garden out back, just big enough for a stone bench and a cherry tree, and on Fridays I’d throw the kind of parties where only seven people are invited and still the whole house fills with chatter and hum, somebody arguing good-naturedly about poetry, somebody spontaneously tearing up and down the scales on a violin.

Gorgeous but not grand … and never grandiose.

I think you get the idea.

I guess it was this sentiment — and this sentiment alone — that drew me to Alan Lightman’s Einstein’s Dreams when I stumbled across a used copy in a Savannah bookstore.

I’d never heard of the book before.  It was copyrighted in 1993, and as a reader with a slow maturation into the meditative, I probably missed its moment by two decades.

I had to have it.

I’m only about halfway through by now, and I’m enjoying it slowly.

The text poses as a fictional collection of dreams — Einstein’s dreams, of course — which he experiences as a young man in 1905, when he’s still musing over his theory of relativity.

This collection isn’t for everyone — it’s mystical and metaphysical, and some of the meditations verge on being gushy and sentimental (I am — no surprise here — largely okay with that).  And while Lightman calls this fiction, I’m more inclined to call it fable:  no characters, no plot … just big ideas, hammered into exquisitely small stories.

But whatever you call them,  the stories do, in fact, feel *exactly* like dreams:

There is a place where time stands still.  Raindrops hang motionless in the air. Pendulums of clocks float mid-swing.  Dogs raise their muzzles in silent howls.  Pedestrians are frozen on the dusty streets, their legs cocked as if held by strings.  The aromas of dates, mangoes, coriander, cumin are suspended in space.
As a traveler approaches this place from any direction, he moves more and more slowly.  His heartbeats grow farther apart, his breathing slackens, his temperature drops, his thoughts diminish, until he reaches dead center and stops.  For this is the center of time.  From this place, time travels outward in concentric circles — at rest at the center, slowly picking up speed at greater diameters.
Who would make a pilgrimage to the center of time?  Parents with children, and lovers…

All of this is surreal enough that if I were to read too much at once, I’m afraid I might fall into some kind of fugue state and wake up weeks later painting landscapes onto city sidewalk panels, one after another, while bystanders gape at the Crazy Lady getting paint in her hair.

But I like Lightman’s magic in small doses.  I like it especially because, in spite of its surrealism, it feels surprisingly truthful… which is precisely how surrealism ought to feel.

If you’re the kind of person who thinks the theory of relativity is a touch romantic — or you wonder what on earth it would feel like to be that kind of person — you might like this book.

Either way, I’m enjoying it — enough that one day, I’d be willing to give Einstein’s Dreams a narrow home on the bookcase in my imaginary, perfectly tiny Georgetown nest.  ❤ 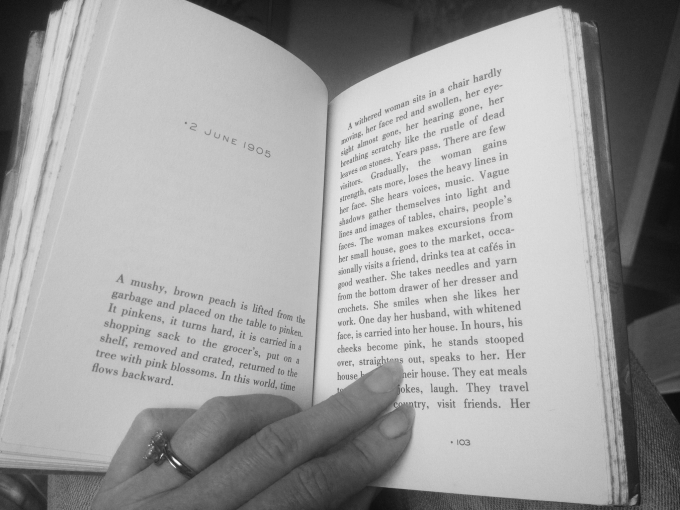